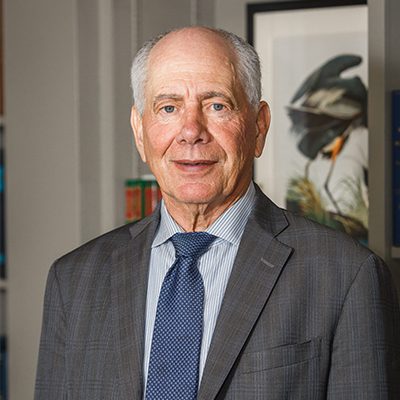 “I’ve always rooted for the underdog. Practicing law is the way I can stop rooting and do something to help.”

Sometimes in life, the second act is just as good – if not better – than the first. Gary Goldberg’s journey proves the point.

A Brooklyn native, the son of a mover and a secretary, Gary fights from the corner of the working man. Straight out of Columbia Law School in the early 1970s, Gary quickly made a name for himself as one of the best plaintiff’s lawyers in Maine. Much of that reputation was earned in the courtroom, where Gary is a natural storyteller and a fierce advocate. There is no one better at speaking to jurors in clear and compelling language. He continued to solidify that reputation throughout the ‘80s and ‘90s.

For a time, Gary’s career was put on hold. Health problems forced him to step away from the practice of law. For someone as successful and driven as Gary, it was a tough blow. Sometimes he doubted if he would ever return to the courtroom. But as Gary’s health improved, doors opened again. Around 2010 Gary started doing mediation work. In 2011, when Terry Garmey opened his own firm in Portland, Gary was excited to be asked to be on board. Now Gary handles a range of plaintiff’s cases, including personal injury and medical malpractice.

And that reputation he once had as a closer in the toughest cases? It’s back! Gary’s first trial back was one of those “tough cases” that many lawyers shy away from. It was forwarded by another attorney shortly before trial. Gary talked to the jury the way he always has: simply, clearly, and straight from the heart.

The jury responded with a verdict of $750,000. Gary had taken the case because he valued the plaintiff, a young Romanian woman who had come to the United States to earn money to buy a camera for her future career as a photographer, and believed in her.

Gary is also immersed in his second passion – the training of other lawyers. He is a former member of the Board of the Maine Trial Lawyers Association, and ran their Continuing Legal Education programming for years. He also taught trial practice at the University of Maine School of Law. Today, Gary often conducts Continuing Legal Education seminars focusing on trial skills for large firms (100 or more lawyers), small firms, and solo practitioners. The goal is to teach lawyers to close the gap between how they speak as lawyers, and how they talk as people — a process he calls “de-lawyering.” Gary enjoys passing his own knowledge on to others, and he also enjoys the personal connections he makes with both young and experienced lawyers. Gary says, “If you have a trial the next day, and you want to call me at 11 o’clock at night when you need some guidance, go for it.”

Gary has been involved in many charitable causes, most notably a project that he started in which the communities of Lewiston and Auburn, Maine, funded a very extensive immunization education and clean water project in the Doukala region of Cameroon. This project, administered by Save the Children, significantly decreased the area’s infant mortality rate. Gary has also served on the board for Furniture Friends, a nonprofit organization that provides furniture to immigrants in the Greater Portland area. Gary’s wife Margery, started and ran a nonprofit adoption agency for over 15 years specializing in foreign adoptions.