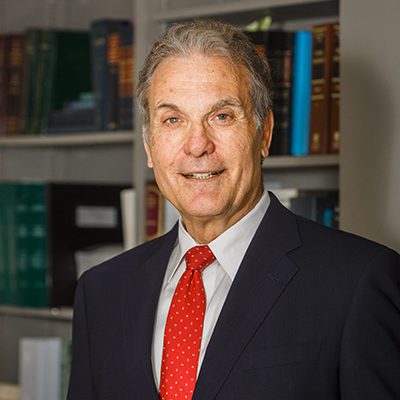 My satisfaction comes from helping people whose lives have been turned upside down to have a fair shot at justice, no matter how big or powerful the opposition.

Terry Garmey has fought on behalf of plaintiffs for more than 40 years, has earned more 7-figure verdicts of any attorney in the state of Maine, and has received the highest awards and accolades in his field. Terry was the first lawyer from Maine to be invited to the Inner Circle of Advocates, an organization comprised of the top 100 plaintiff lawyers in the U.S. He was also invited into the prestigious American College of Trial Lawyers and has repeatedly been named Personal Injury Litigator of the Year for Portland, Maine by Best Lawyers.

Terry has appeared on Good Morning America and the Today Show, and many other news outlets across the country. In 2018 he received the Legends Award by the Maine Trial Lawyers Association, an event at which Angus King and George Mitchell spoke on his behalf.

While he appreciates the recognition, Terry has long recognized that plaques and certificates don’t define a person. Relationships do. To understand what motivates Terry, all you have to do is step inside his office on Monument Square in Portland, Maine.

One of the first things you’ll see is a poster-sized photograph behind his desk. It shows a young boy with a mop of light brown hair, dressed neatly in a suit coat and tie, smiling at the camera. That boy, Tucker Smith, was 8 years old when he was crushed to death by an elevator at a country inn in Bethel, Maine.

Terry represented Tucker’s parents in a lawsuit against Otis Elevator Co. Through the process, Terry uncovered a series of child deaths dating back to the 1930s, along with evidence that the company knew the dangers but failed to address them. In the end, Otis paid $3 million to the Smith family. More importantly, the company launched a national safety campaign, including the installation of protective guards on more than 4,000 elevators. That fulfilled the wish of Tucker’s parents – to make sure other families would not have to face the same tragedy.

“I have Tucker’s picture in my office to remind me of why I do what I do,” Terry says. “I promised myself I would never forget that family or Tucker’s life. That’s a promise I intend to keep.”

If his path had been different, Terry Garmey might have stayed in his hometown of Canton, Ohio. He might have been a salesman like his dad, or a steelworker like so many others in the neighborhood. Instead, Terry found purpose in a courtroom, fighting for people who have been hurt and families who have suffered a loss. This outspoken kid from a blue-collar upbringing was cut out to be one of the top plaintiff’s lawyers in the country.

Terry attended La Salle University in Philadelphia, taught at a reform school, went to broadcasting school and landed work as a disc jockey. That led him to Boston, where he hosted a show on WRKO. He worked at a drug rehab center and earned a master’s degree in education at Harvard University. After watching the court-appointed lawyers who represented clients of the rehab center, Terry decided to enroll in law school. In his third year, he worked for the Suffolk County District Attorney’s Office. He was trial assistant in the highly publicized case of Commonwealth v. Susan Saxe, a former Brandeis University student who took part in a bank heist during which an accomplice shot and killed a Boston police officer. After graduation and another year at the DA’s office, Terry knew he wanted to work as a plaintiff’s lawyer.

The firm of Smith & Elliott in Saco, Maine, gave Terry that opportunity in 1978. Over the next 33 years, Terry became a partner and built a reputation as a smart and fierce advocate with a relentless work ethic. He achieved numerous seven-figure settlements and verdicts. In 2011, Terry started his own firm.

“My approach is to take a complex problem and to make it as simple as possible by breaking it down into pieces. That intuitive aspect, scanning the surface of a problem and finding the important components quickly, I think that is one of my strengths,” Terry says. “But I think my greatest skill is the ability to surround myself with people who can help me do the job.”