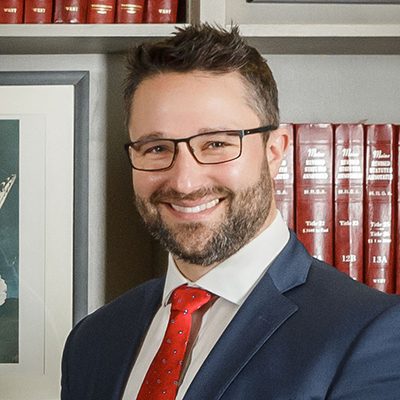 “The first time I needed legal assistance I met with countless lawyers, and Peter immediately stood out as being the best among them. He provided a wealth of information, was cerebral with his direction, and I never once doubted his aptitude or resolve…Peter Richard is an exceptional attorney, and if I should ever need one again, he will be my first and only call. He has my highest possible recommendation.”

Trial work and litigation are Peter’s passions. Standing shoulder-to-shoulder with a client in front of a judge and jury is what makes his blood flow and where he feels truly comfortable. He eats, sleeps, and breaths litigation, looking forward to each opportunity to advocate on his clients’ behalf.

Peter Richard started working at age 15 on a hay farm. He hasn’t stopped working just as hard ever since, managing two to three jobs at a time from high school through college.  Peter graduated from the University Of Maine School Of Law in 2010, where he captained the Maine Law Trial Advocacy Team and completed internships with the United States Federal Public Defender’s Office and DeGrinney Law Offices.

After law school, Peter was a trial lawyer with DeGrinney Law, where he tried civil and criminal cases. Within his first two years of practice, Peter was admitted to the Maine Commission of Indigent Legal Services Serious Violent Felony Specialized Case Panel, the Maine Sex Offender Specialized Case Panel, and the Maine Homicide Specialized Case Panel. He handled a number of high-profile criminal cases that received significant media attention and was frequently interviewed by the media as a legal expert regarding high-profile criminal cases. In 2014 and 2015, Peter was named a 2014 and 2015 Super Lawyer’s Rising Star for Criminal Law in New England. After DeGrinney Law, Peter went into the private sector, most recently working as a System Director at Central Maine Healthcare.

Despite his successes in the corporate world, Peter was drawn back to his love of the courtroom and serving clients, joining Garmey Law in 2021. At the end of the day, Peter knew he could best serve his community and the people of Maine – and find joy in work — by being in the courtroom and trying the most difficult cases. Peter returns to the law with the benefit of his experience in banking, manufacturing, and healthcare industries.

Peter has volunteered as a member of the Board of Directors and Advisory Committee for the My Place Teen Center in Westbrook, a non-profit resource for at-risk youths, and volunteered within the Town of Topsham’s government as a Co-Chair of the Finance Committee, the Vice-Chair of the Planning Board, and a member of the Zoning Board of Appeals. He also volunteers as a youth coach for a number of sports in Topsham, where he lives with his wife Catherine, and is often found cheering on his three kids from the coach’s bench or the sidelines.

Given his penchant for collecting hobbies – whether brewing (pretty good) craft beer, hunting, and fishing, musical theater, or the seven competitive sports he played in college – Peter can find something in common with most people he meets.